Who studies religion? This question is surprisingly hard to answer. A brief glance at the literature reveals medical researchers, sociologists, neuroscientists, historians, and many others involved in investigating different aspects of “religion” or “spirituality.” But what do these different approaches have in common (if anything)? While some research strains are clearly related, others appear to be operating in separate academic universes, passing by each other like ships in the night. To reveal the underlying structure of research on religion, this chaotic and complex picture needs an empirical approach that goes beyond overt disciplinary boundaries.

Over the last few years, the team at CMAC has used advanced data analytics and social network approaches to do just that. The Field Mapping team has steadily built a database of publications in the scientific study of religion, including work in the field of Spirituality and Health. This database includes information about co-authorship, publication venues, institutional homes and funding sources. By compiling this information into a single place, CMAC can begin to analyze and investigate the variation in research trends across time and space, answering the questions about who, where, how, and why the scientific study of religion is being pursued across the globe. At a glance, Field Mapping provides quantitative measurements of publications by author, institutions, country, subfield, and year. Detailed author information yields information on trends in scholarship at different times, as measured by the age of authors or the years of their terminal degrees. From this we have learned that the scientific study of religion now outpaces traditional humanities approaches in terms of publication by quite some distance.

The project also uses a variety of more sophisticated techniques to detect topical and social clustering that can define distinct subfields. For example, the team built a network based on co-authorship of articles that revealed a massive, complex landscape of interaction between different individuals and institutions. This enabled the team to concretely investigate about which fields collaborate more frequently with one another, and which subfields are more isolated. For example, there is almost total isolation between traditional humanities scholarship in the academic study of religion and the scientific approaches to religion. This information helps to raise awareness about the bustling fields of inquiry that are not normally considered part of traditional religious studies, such as the massive amount of research in Spirituality and Health.

It also draws attention to systematic problems, such as the fact that, despite dominating publication count in the academic study of religion, the scientific approaches are not benefitting from collaborations that activate the nuance and interpretative sophistication furnished by the humanities disciplines. That in turn can inspire new strategies for designing research studies and organizing university resources.

Ultimately, the results of the Field Mapping Project will encourage greater communication between different fields and promote a more cohesive interdisciplinary approach in the academic study of religion.

Values in Scholarship on Religion (VISOR)

The Values in Scholarship on Religion Project (VISOR) is a project within Field Mapping. This project focuses on gathering information about the values held by scholars of religion (across a wide variety of sub-disciplines) so that we can have a more informed conversation around the academic table. Scholars within various academic fields have significantly varying opinions over questions of definition, methodology, and audience. One of the most obvious places of confusion and dissent surfaces around the belief that scholars of religion should pursue the same sort of intellectual objectivity as scholars in the secular academy. The VISOR team is amassing survey responses at visorproject.org as well as intentionally seeking out consultation and advisement from experts with diverse religious and political opinions. 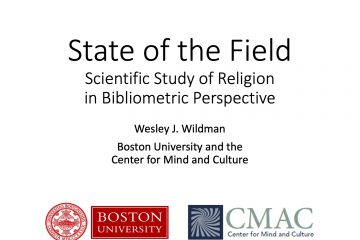 Presentation: State of the Field Scientific Study of Religion in Bibliometric Perspective 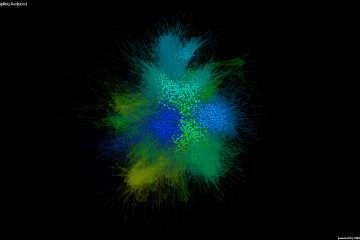 Presentation: Using Bibliometrics to Understand the Past 25 Years of CSR 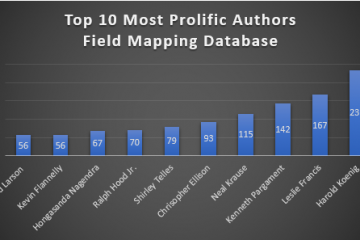 Finding the Top Authors in the Scientific Study of Religion